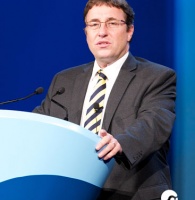 UNEP Executive Director and Under-Secretary-General of the United Nations

Acting on the nomination of Secretary-General Kofi Annan, the UN General Assembly in 2006 unanimously elected Achim Steiner as the Executive Director of UNEP for a four-year term. He became the fifth Executive Director in UNEP's history. At its 83rd plenary meeting in 2010, the UN General Assembly, on the proposal of the Secretary-General Ban Ki-moon, re-elected as Executive Director of the United Nations Environment Programme for another four year term. In 2009, the Secretary-General also appointed Mr. Steiner as Director General UNON which provides the administrative, conference, security and logistics services to the UN family in Kenya, which hosts offices and projects of more than 60 UN agencies, Funds and Programmes, and over 5,000 staff.

Before joining UNEP, Mr. Steiner served as Director General of the World Conservation Union (IUCN) from 2001 to 2006, and prior to that as Secretary General of the World Commission on Dams. His professional career has included assignments with governmental, non-governmental and international organisations in different parts of the world. He worked both at grassroots level as well as at the highest levels of international policy-making to address the interface between environmental sustainability, social equity and economic development.

Mr. Steiner, a German and Brazilian national, was born in Brazil in 1961. His educational background includes a BA from the University of Oxford as well as an MA from the University of London with specialisation in development economics, regional planning, and international development and environment policy. He also studied at the German Development Institute in Berlin as well as the Harvard Business School.

He serves on a number of international advisory boards, including the China Council for International Cooperation on Environment and Development (CCICED).

“UNEP and the UN system as a whole congratulates the organizers on the Eye on Earth Special Initiatives proposed as contributions to Rio+20 and beyond.  I am delighted that here at the Eye on Earth Summit that the Network of Networks Special Initiative involving the Abu Dhabi Environment Agency, European Environment Agency, ESRI, UNEP and others is officially launched.”