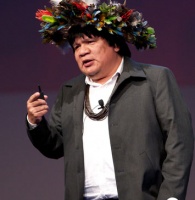 Almir Narayamoga Surui, 32, an environmentalist, political activist and tribal chief, has been fighting to save both his Surui tribe and the Amazon rainforest for more than 15 years. His efforts are credited with almost single-handedly bringing his tribe back from the brink of extinction. His opposition to logging, mining, agricultural and other development interests in favour of more sustainable ventures in western Brazil has made him the target of death threats and violence.