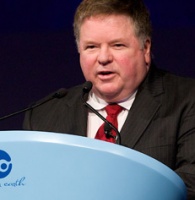 became Deputy Assistant Secretary for Environment in the Bureau of Oceans, Environment and Science on August 20, 2006. He is responsible for a broad suite of issues related to environmental protection and conservation, including: transboundary air quality, protection of the stratospheric ozone layer, international chemicals management, the transboundary movement of hazardous wastes, persistent organic pollutants, environmental aspects of free trade agreements, international forestry conservation, biological diversity, desertification, wildlife conservation and the protection of wetlands and coral reefs. In these areas, he leads the U.S. delegation under multiple bilateral and multilateral treaties and agreements.

He has received numerous awards including the Department of State’s Superior Honor and Meritorious Honor Awards. He has been a member of the Senior Executive Service since 1994, and in 2005 received the Presidential Meritorious Rank Award.