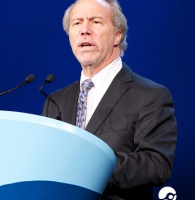 Dr. is a renowned ethnobotanist and social entrepreneur who has spent almost three decades studying traditional plant use with elder Shamans (traditional healers) of tropical America.

As an ethnobotanist-a scientist who studies how, and why, societies have come to use plants for different purposes-Dr. Plotkin carried out the majority of his research with the Trio Indians of southern Suriname, a small rainforest country in northeastern South America, but has also worked with eminent shamans in other tropical American countries.

Dr. Plotkin has written several influential books, most notably his popular work Tales of a Shaman's Apprentice, which is currently in its thirtieth printing and has also been published in Dutch, German, Italian, Japanese and Spanish.  Acclaimed filmmaker Miranda Smith produced a related documentary titled the The Shaman's Apprentice featuring Dr. Plotkin's work, which has since garnered awards at sixteen different film festivals. He also wrote the critically acclaimed children's book The Shaman's Apprentice - A Tale of the Amazon Rainforest (1998), illustrated by Lynne Cherry.

The author of numerous scientific papers and reports, Dr. Plotkin's critically acclaimed book, Medicine Quest: In Search of Nature's Healing Secrets, was published in early 2000.  His most recent book (coauthored with Michael Shnayerson), The Killers Within: The Deadly Rise of Drug-Resistant Bacteria, was published by Little, Brown in September of 2002.  It was selected as a Discover Magazine book of the year.

In 1998, he played a leading role in the Academy Award-nominated IMAX film Amazon. Time Magazine hailed him as an environmental "Hero for the Planet" in 1999.

Dr. Plotkin's work has been featured in a PBS Nova documentary, in an Emmy-winning Fox TV documentary, on the NBC Nightly News and Today Show, CBS' 48 Hours and in Life, Newsweek, Smithsonian, Elle, People, The New York Times, along with appearances on National Public Radio.  Dr. Plotkin received the San Diego Zoo Gold Medal for Conservation (1993) and the Roy Chapman Andrews Distinguished Explorer Award (2004). Time magazine called him an "Environmental Hero for the Planet" (2001) and Smithsonian magazine hailed him as one of "35 Who Made a Difference" (2005), along with other notables like Bill Gates, Steven Spielberg, and fellow New Orleanian Wynton Marsalis.

In March 2008, Plotkin and Madrigal were among those chosen as "Social Entrepreneurs of the Year" by the Skoll Foundation.

In May 2010, received the honorary degree of "Doctor of Humane Letters" from Lewis and Clark College in Portland, Oregon. The degree citation read in part: "For teaching us that the loss of knowledge and species anywhere impoverishes us all; for combining humanitarian vision with academic rigor and moral sensibility; and for reminding us always, with clarity and passion and humor, that when we study people and plants, we are simultaneously exploring paths to philosophy, music, art, dance reverence, and healing; Lewis and Clark is honored to confer on you today the Doctorate of Humane Letters, honoris causa." In October of the same year, the great primatologist presented Mark with an award for "International Conservation Leadership."

Dr Plotkin was educated at Harvard, Yale and Tufts University.