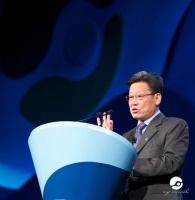 Mr. Sha also serves as the Secretary-General of the United Nations Conference on Sustainable Development, to be convened in Brazil in 2012.

Before joining the United Nations in July 2007, Mr. Sha held a number of posts in the diplomatic service of the People’s Republic of China. He has varied experience with multilateral organizations and international conferences. He was Chairman of the Preparatory Committee and Chairman of the Committee of the Whole, United Nations Conference on Trade and Development (UNCTAD) 11th session from 2003 to 2004, President of the Trade and Development Board, 50th Session of UNCTAD, Chairperson of the Government group of the Governing Body of the International Labour Organization from 2002 to 2003, and member of the UN Secretary-General’s Advisory Board on Disarmament matters from 1994 to 1999. In addition, he has served as president, vice-president, chairperson, coordinator and expert in many international conferences in the field of arms control, trade, intellectual property, social affairs, and telecommunications, among others.

Mr. Sha is a graduate of Nanjing University, China. He is a native of Jiangsu Province and is married, with one son.