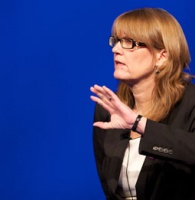 Helena Molin-Valdés is currently the Deputy Director of the United Nations - International Strategy for Disaster Reduction (UNISDR) Secretariat in Geneva, where she has co-ordinated a number of projects and tasks. She is also co-ordinating the Making Cities Resilient campaign 2010-2011. She was a key person from UNISDR in the development and negotiation of the Hyogo Framework for Action 2004-2005, she co-ordinated editing and production team of the publication Living with Risk: A global review of disaster reduction initiatives (2001-2004) and was initially involved in developing the UNISDR-WB partnership in the Global Facility for Disaster Reduction and Recovery. She has worked actively in regional networking for disaster risk reduction, with advocacy, on gender issues, and was the senior policy advisor to ISDR in charge of the sustainable development linkages and Inter-Agency coordination.

An architect by training, with a master degree in development planning, Helena joined the United Nations in 1992, when she set up the regional unit for Latin America and the Caribbean of the International Decade for Natural Disaster Reduction in Costa Rica. She also worked for the Pan-American Health Organization on disaster mitigation in health facilities. Before that, she worked for several years heading a Swedish development NGO focusing on local and municipality strengthening, local building practices and social development projects in Nicaragua, after practicing architecture in Swedish private sector.