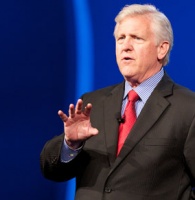 His work with the Clinton Climate Initiative established the Carbon Poverty Reduction Program which deals with forest and land use opportunities to sequester carbon and reduce the threat of climate change, establishing projects in cooperation with the National Governments of Guyana, Cambodia, Indonesia, Kenya, and Tanzania and creating a Measurement, Monitoring, and Reporting team with expertise in remote sensing and satellite technologies to verify climate improvements.

Jan Hartke currently serves on President Obama's Enterprise for the America's Board of Directors, which administers the Tropical Forest Conservation Act. He also serves on the Board of Directors of the National Council for Science and Environment, which seeks to improve the scientific basis for environmental decision- making.

Mr. Hartke was recently elected President of the Earth Council Alliance, first formed in 1992 at the Earth Summit in Rio de Janeiro – by Maurice Strong – the first Executive Director of the United Nations Environment Program (UNEP). True to its original purpose, the Earth Council Alliance seeks to infuse strength and dimension to the sustainable development agenda that was formulated and endorsed by the largest gathering of Heads of State at that point in history.