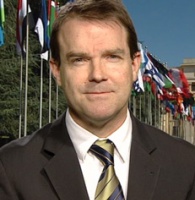 John E. Scanlon was appointed Secretary-General of the Convention on International Trade in Endangered Species of Wild Fauna and Flora (CITES), one of the oldest and best known Multi-lateral Environmental Agreements, on 2nd May 2010. During his tenure, he has implemented a number of bold initiatives related to the use of new information and communication technologies to assist in efforts to conserve and sustainably use species found in the wild.

John has had a unique range of experience with environment and sustainable development policy, law, institutions and governance at the international, national, sub-national and local level.

His work experience has been gained in the private sector, in government, with the United Nations and with international organizations, as a leader, manager, professional adviser and legal practitioner, as well as through senior voluntary positions with the non government sector.

His previous international appointments include:

His Australian appointments include:

In June 2011 John was awarded the Member of the Order of Australia for his service to environmental law nationally and internationally.