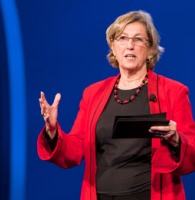 IUCN the world’s largest conservation membership organisation, which brings together States, government agencies, non-governmental organisations, scientists and experts in a unique worldwide partnership. Prior to this, Julia was Rector of the University for Peace (UPEACE), Executive Director of LEAD (Leadership for Environment and Development) International, and Executive Director of the International Council for Science (ICSU). She is a member of a number of boards, including the UN Global Compact and the China Council for International Cooperation on Environment and Development. Ms. Marton-Lefèvre has co-authored numerous books and papers. In 1999 she received the AAAS Award for International Cooperation in Science. In 2008, she was made “Chevalier de l’Ordre national de la Légion d’Honneur” by the French Government and was named Global Ambassador for Hungarian Culture. She is a Fellow of the UK’s Royal Geographical Society and a Fellow of the World Academy of Art and Science. Born in Hungary, Marton-Lefèvre studied history, ecology and environmental planning in the US and in France.