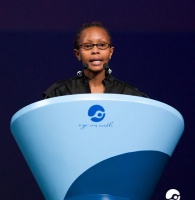 is Co-Founder and Executive Director of Ushahidi Inc, a non-profit tech company, born in Africa, which specializes in developing free and open source software for information collection, interactive mapping and data curation.  Ushahidi builds tools for democratizing information, increasing transparency and lowering the barriers for individuals to share their stories.

Juliana has worked in the telecommunications and data warehousing industry for over ten years.  She is originally from Kenya, with a Computer Science degree from the University of Missouri, Kansas City. She is a Technologist, African Futurist and TED Senior Fellow.

She co- founded Mobisoko, a mobile marketplace for language and location relevant apps in Africa. She speaks at international conferences about technology, innovation, mobile technology, open source, and Africa. Past conferences she has spoken at include Lift, DEMO, TTI Vanguard, TransMediale, WSIS, DLD Women, Guardian Activate World Economic Forum -Davos, and ARS Electronica. She believes in the transformational power of technology to address social problems in the world, particularly in Africa.

She was named one of the Top 100 women by the Guardian newspaper and top 2 women in Technology 2011, and Social Entrepreneur of the year 2011 by The World Economic Forum.