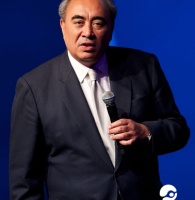 Foundation for the Peoples of the South Pacific

Lelei LeLaulu is a development entrepreneur working at the confluence of climate change, tourism, food security and renewable energy. A coordinator of the Oceania Sustainable Tourism Alliance, Lelei is also Executive Director of the Small Island Developing States Climate Change Alliance of the Earth Council and President of the renewable energy company, Sustainable Solutions in the Dominican Republic. He is Chairman of the Foundation for the Peoples of the South Pacific (FSP) the oldest and largest non-profit development network in the Pacific islands. Until 2008 he was President/CEO of the development and humanitarian agency, Counterpart International, expanding its operations to the Caribbean, Latin America and Africa. Lelei was a member of the small group hand-picked to reform the United Nations in the 1990s, Secretary of the Task Force to Re-orient UN Public Information Activities, and Chairman for a decade of the Committee for the Security and Independence of the International Civil Service working on the release of hostages and detained people. He was a member of the team that organised the series of summits and global conferences in the 1990s known as the "Development Continuum" which defined the global agenda for the succeeding decade through the Millennium Development Goals. In addition to working for the Hudson Institute think tank, Lelei served as the US Bureau Chief for International Communications, the London-based company that is the world's largest publisher of magazines and periodicals in English on Africa and the Middle East. Born in Samoa, Lelei is a board member of several international organisations including Applied Brilliance, the National Cancer Coalition of the US, and the South-Eastern Europe Film Festival. He is a founding director of the World Tourism Forum for Peace and Sustainable Development, and the Caribbean Media Exchange on Sustainable Tourism (CMEx), the George Washington University School of Business, an original member of the Symposium series on Religion, Science and the Environment, and manager of the Royal Polynesian Dancers' world tour.