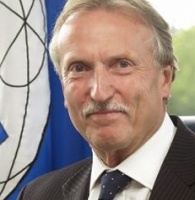 was elected Director of the ITU Telecommunication Standardization Bureau by the Plenipotentiary Conference 2006 in Antalya, Turkey. He took office on 1 January 2007. On 7 October 2010 he was re-elected for a second term by the ITU Plenipotentiary Conference in Guadalajara, Mexico, and began his second term on 1 January 2011. During his time in office he has raised awareness of the significance of the standardisation work of ITU in general but especially in relation to some of the most critical challenges of our time such as: cybersecurity; climate change; and accessibility to ICTs for persons with disabilities.

Greater involvement of developing countries in ITU’s standards activities has also been a major focus and success. ’s decision to recommend to the ITU Council the free downloading of ITU-T Recommendations was a significant contribution to this end, as were a series of events around the world aiming to better engage developing countries. He also initiated a programme to address major developing country concerns over lack of interoperability and conformity to ITU standards. Under his leadership, collaboration between ITU-T and other organisations has been improved, and greater involvement of key stakeholders in the work of ITU-T, such as universities and research institutes, has been a major achievement with the initiation of the annual Kaleidoscope Academic conferences in 2008.

Prior to his election as Director of TSB he had lead responsibility for UK in ITU and CEPT at the UK’s Office of Communications (Ofcom). Between 1992 and 2003, he was Director of the UK’s Radiocommunications Agency, and between 1987 and 1992, he worked in the Telecommunication Regulations Division of DGXIII of the European Commission. Before this he represented UK in many other international organisations. He graduated from the University of Wales, Cardiff with 1st Class Honours BSc and MSc in 1976.