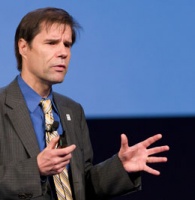 Mathis is co-creator of the Ecological Footprint and has worked on sustainability issues for government agencies, NGOs and businesses on all continents. Mathis previously served as the director of the Sustainability Program at Redefining Progress in Oakland, California, and ran the Centro de Estudios para la Sustentabilidad in Xalapa, Mexico. Mathis has authored or contributed to over 50 peer-reviewed papers, numerous articles and reports and various books on sustainability that focus on the question of embracing limits and developing metrics for sustainability, including Our Ecological Footprint: Reducing Human Impact on the Earth; Sharing Nature’s Interest; Der Footprint: Die Welt neu vermessen, and WWF International’s Living Planet Report. After earning a degree in mechanical engineering from the Swiss Federal Institute of Technology, he completed his Ph.D. in community and regional planning at the University of British Columbia in Vancouver, Canada. There, as his doctoral dissertation with Professor William Rees, he created the Ecological Footprint concept. Beginning in 2011, he will also be the Frank H. T. Rhodes Class of 1956 Visiting Professor at Cornell University. Mathis’ awards include an honorary doctorate from the University of Berne in 2007, a 2007 Skoll Award for Social Entrepreneurship, a 2006 WWF Award for Conservation Merit and the 2005 Herman Daly Award of the U.S. Society for Ecological Economics.