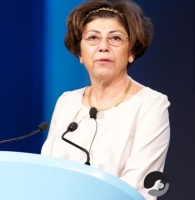 Mrs. , a French national, is the Chief Executive Officer (CEO) and Chairperson of the GEF since August 2006.

She was appointed by a unanimous decision of the GEF Council on June 2006. During her tenure and following its fourth replenishment at a level of $3.13 billion, she has undertaken a revitalization of the GEF organization to make it a more effective, responsive and results– based institution. In November 2008, Mrs. Barbut was reappointed by the GEF Council for another three-year term and in this position has steered the fifth GEF replenishment process to a record level of $4.34 billion.

Prior to joining the GEF, Mrs. Barbut served as Director of the Division of Technology, Industry and Economics of the United Nations Environment Programme (UNEP) from September 2003 to July 2006, where she undertook a reorganization of the Division and established a pragmatic approach to ensuring the link between environment and economics, setting up development policies and pilot projects, including in developing countries or countries experiencing critical backgrounds (China and Iraq).

Between 1981 and 2003, Mrs. Barbut had a long career in different positions at the Agence Française de Développement Group (AFD), the main French public institution for aid in development. During that period, Mrs. Barbut led different positions related to French aid system particularly project financing activities in the French overseas territories, and activities relating to ex-post evaluation. Throughout the 1990s, she became increasingly involved with the issue of financing sustainable development, both for the French government and on the international scene in general. In 2003, she was appointed as Executive Director for all Caribbean, Pacific and Indian Ocean activities.

Mrs. Barbut is married and has three children.