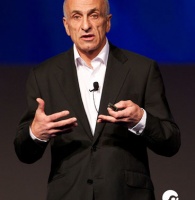 The Group on Earth Observations (GEO)

José Achache became the first Director of the Group on Earth Observations (GEO) Secretariat in 2005. Of French nationality, Prof. Achache began his career at the Institut de Physique du Globe de Paris as a Research Assistant and then as “Chargé de Recherche”. In 1989, he became a Professor, created the Department of Space Studies and was appointed Director of the Graduate School of Earth Sciences.

In 2002, Prof. Achache joined the European Space Agency (ESA) as Director of Earth Observation. While at ESA, he developed the Global Monitoring for Environment and Security (GMES) programme in partnership with the European Commission.

José Achache is the author of a scientific and geopolitical essay entitled Les Sentinelles de la Terre, which discusses the benefits of Earth observation for a better management of the planet, adaptation to environmental changes and the mitigation of disasters and epidemics. He has published more than 70 scientific papers in international journals on subjects in Earth sciences, geophysical imaging, planetary sciences, Earth observation from space, natural hazards, and space and science policy.