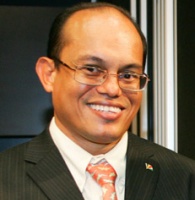 As an international policy expert and researcher on environment and island issues, Rolph Payet is currently Special Advisor to the President of the Republic of Seychelles on numerous environmental matters including sustainable development, biodiversity, climate change, energy, and international environment policy.

Recently, Rolph has been invited to sit on numerous international conference committees and panels, and as moderator/speaker on climate change, biodiversity and island issues. Recently invited by H.E. Ban Ki Moon, Secretary General of the UN, he acted as lead discussant on a panel on the Millennium Development Goals at the UN General Assembly. His work has also been covered by the international media, such as CNN and the BBC.

Rolph has received numerous international awards and recognition for his work on islands, climate change and biodiversity. In November 2007, he shared in the IPCC Nobel Peace Prize as an IPCC Lead Author. In January 2007, he was selected a Young Global Leader by the World Economic Forum.