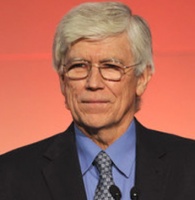 Whether clasping the hand of a world leader in a firm handshake or gently cradling a mouse lemur in his palm, there is no one on Earth quite like . When he isn’t hip deep in piranha-infested waters, he’s hammering out agreements between CI and indigenous tribes or multinational corporations. The man once described as the Indiana Jones of conservation is the only working field biologist at the head of a major international environmental organisation, and he brings the daring and ingenuity that have served him so well in the field to his role at the helm of Conservation International. Addressing a scientific convention, the board of a global conglomerate, or the crowds gathered for the opening of the Expedition Everest ride at Disney’s Animal Kingdom, Russ is nothing short of a force of nature when it comes to inspiring crowds with his wild experiences and bold vision.

The scientific community has honored Russell's conservation achievements by naming six new species after him, including two lemurs. He himself has described another nine species: six primates and three turtles.

Conservation solutions: Over his years in the field Russell has seen the varied ways the global environmental catastrophe plays out at the local level. The cutting edge responses Russell spearheads at CI recognise the need to take local factors into account in addressing the worldwide threat to biodiversity.

Madagascar: Russell has tramped the length and breadth of this unique island and is one of the key players in developing conservation strategies for this hotspot. Few people know more about Madagascar’s biodiversity, and no one has done more to protect it.

South America: There are remote regions of Suriname and Brazil that would baffle the most intrepid explorer, but Russell knows them like the back of his hand. Few people are as knowledgeable about the cultural, political, and environmental issues of this vast and varied continent.

Primates, reptiles, and amphibians: One day he’s risking life and limb to catch goliath frogs in Equatorial New Guinea. The next, he’s hunting for signs of ape-like creatures in the Himalayas. Russ treats the world as his personal petting zoo, and the decades he has spent with the animals he loves in their natural habitats give him special insight on the need to preserve them for future generations.

Conservation corridors: Russell may be comfortable striding the corridors of power, converting CEOs and heads of state to the cause of conservation, but his heart is in the conservation corridors- linked parks and reserves in the hotspots and high biodiversity wilderness areas that allow animals to follow their natural migration paths. Russell and CI pioneered this unique concept that maximises the effectiveness of protected land.