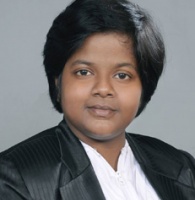 Vice-President of the Global Board of Plant-for-the-Planet- the Billion Tree Campaign, Student Inititative and Goodwill ambassador of Tarumitra – an NGO of more that 1700 high schools across India

A grade 11 student from St.Fidelis School, Lucknow, has served as the representative of Asia and the Pacific region in the Junior Board of United Nations Environment Programme (UNEP) from 2008 to 2010 and currently is Vice-President of the Global Board of Plant-for-the-Planet- the Billion Tree Campaign, Student Inititative and Goodwill ambassador of Tarumitra – an NGO of more that 1700 high schools across India. She had been coined the name “Green Girl” by national media. She holds the record of being youngest Indian to speak at TED and youngest person ever to address the United Nations General Assembly in New York. Someone who is very passionate about the cause of environment, she has been actively indulged in efforts towards betterment of planet.

As Junior Board for UNEP and TUNZA Mentor - She became associated with UNEP in June 2008, at age of 12, when she was elected, by 106 countries, into the Junior Board as Asia Pacific representative at the International Children conference held in Norway. One of the biggest highlights of her work was that she had the honour to address UN General Assembly – more than 100 heads of states including US President at the Climate Change Summit in New York in September 2009, when she was just 13, as the youth representative. She has been a part of the organising committee for UNEP International Children and youth conferences held in South Korea(2009) and Japan(2010) and attended the same as Asia Pacific Representative. She has also the core child representative at UNEP 2009-2014 Agenda finalising meeting held at UNEP Head Quarter in Nairobi. Recently in September 2011, she represented Tarumitra and Plant for the Planet in TUNZA conference in Indonesia. She has given presentations, moderated various sessions, conducted discussions on iconic Youth Statement in Korea, and took part in tree planting there.

As Goodwill Ambassador of Tarumitra - A dynamic speaker, a class topper, “girl who changed the climate at UN”- as Hindustan Times quotes her, she has always believed in the idealogy of “Think Globally, Act Locally” and for the same purpose, she has been indulged in grassroot level activities that includes tree-planting, conducting Green Parliaments for youth and children, conducted study of River Ganges, took out rallies, shared her views with people and has spoken at dozens of forums and conferences as the youth voice. At the headquarters of Tarumitra, situated in Patna City, they have created a bio-reserve that preserves and nurtures around 525 endangered plant species- a place that has attracted attention for its green beauty of students for exchange programmes all over the world.

Tarumitra had been officially granted rights by Bihar State government to conduct Pollution Control check on vehicles and issue them PUC certificates.

As Vice-President, Plant-for-the-Planet Global Board - The Student Initiative of Plant-for-the-Planet was started in 2007 in Germany and since then it has grown significantly, also launching the famous StopTalking - StartPlanting Campaign that features children closing the mouth of politicians – sending out a strong message for Climate Justice.

On 24th September 2011- the Stand Up and Take Action Day, plant-for-the-planet activists all over the world wrote letters to embassies of countries and carried out plantations. The team earlier in 2011 had been to South Africa, Durban in preparation for COP17.

As an environment activist- fighting for “future” - Yugratna spoke at TED in Mumbai last year with a speech entitled “Climate Justice- Yes We Will” Apart from that, she has raised voices in many corporate forums including TATA Consultancy Services – on World Standard’s day, SCMLD- a business school in western India, State bank of India etc. asking them for proper implementation of Corporate Social responsibility.

U.S. Ambassador for India has made her and school a part of Globe Campaign by Mr. Al Gore.

This year for World Environment Day 2011, Yugratna interacted with youngsters gathered from over the nation and gave them tips for ensuring a greener lifestyle. She has also been an active part of Divine India Youth Association(DIYA) as a part of which she has addressed gatherings at Mumbai and Surat of more than 10,000 people. Apart from that she has been a youth representative to Indian Model of United Nations, Leadership summit by Hindustan and IBN7, events at Art Academy, Science centre and Kabeer Peace Mission. On Peace Day, i.e. 2nd of October, they took out a peace march of about 2000 teachers in the city. She has also been associated with 350.org. In 2009, she worked with her soul for “Seal the Deal” campaign and later spoke about India’s stand in Copenhagen at the Environment Conference conducted by IEM. She has also taken part in tree planting activity by Caritas.